The history of SAP Business One Chapter 1

The history of SAP Business One

SAP Business One, which began as a small idea, is now more than 20 years old, and with nearly 1 million users in more than 160 countries, is a leading product in the global Small Midsize Business market. It is an entrepreneurial success story showing that with the combination of vision, determination, passion and self-belief one can overcome enormous challenges.

What follows is a series outlining the story of how an idea launched in Israel became SAP Business One. In each episode of this blog series, we will cover a milestone of the product with stories and anecdotes of people that took part in the exciting journey. 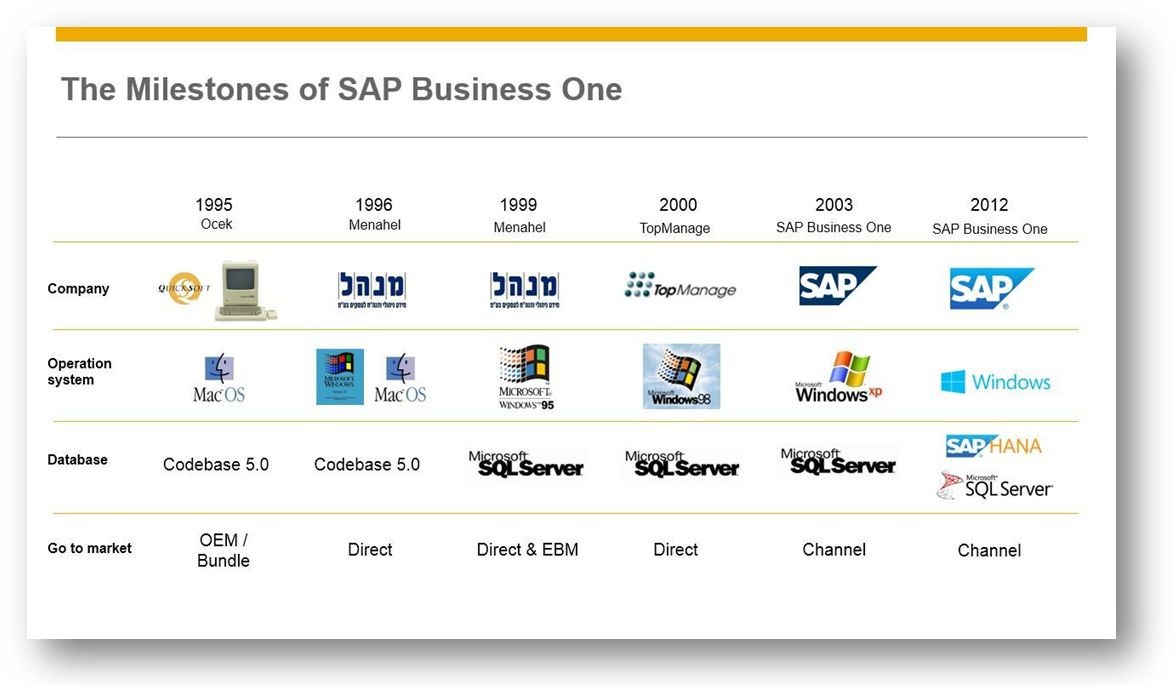 Chapter 1 – From Idea to Product

In the early 90’s Shai Agassi and his father, Reuven Agassi, started The QuickSoft Company. One of the cornerstone developments of the group was the Awarded Object Oriented Navigation System that later was the basis of the Drag & Relate functionality of SAP Business One. The team was busy in those days in developing applications for school management and administration in the USA, as well as catalogue management for a global cutting tools company.

At the time, the financial software available for small and midsize businesses was dominated by DOS operating system. Nevertheless, the biggest player of financial systems and the distributer of Apple computers in Israel joined forces to develop a financials software system for the Macintosh (Apple rebranded to “Mac” in 1998). Despite good intentions, they failed.

Reuven Agassi: “we wanted to implement innovative technologies in the business world in order to create reliable software solutions that are better than those available in the market.”

In 1994 the Agassi family and QuickSoft struck a deal to work with the Israeli Macintosh distributer to try again. According Reuven Agassi, the founder, “we wanted to implement innovative technologies in the business world in order to create reliable software solutions that are better than those available in the market.” Once it was in advanced stage, Reuven asked Shai and co-manager Udi Ziv how long it would take to translate the application from Mac to Windows OS. They estimated 2-3 weeks, but it took much longer. To make sure development will be on time; the employees worked very hard and many times finished the day work after midnight. 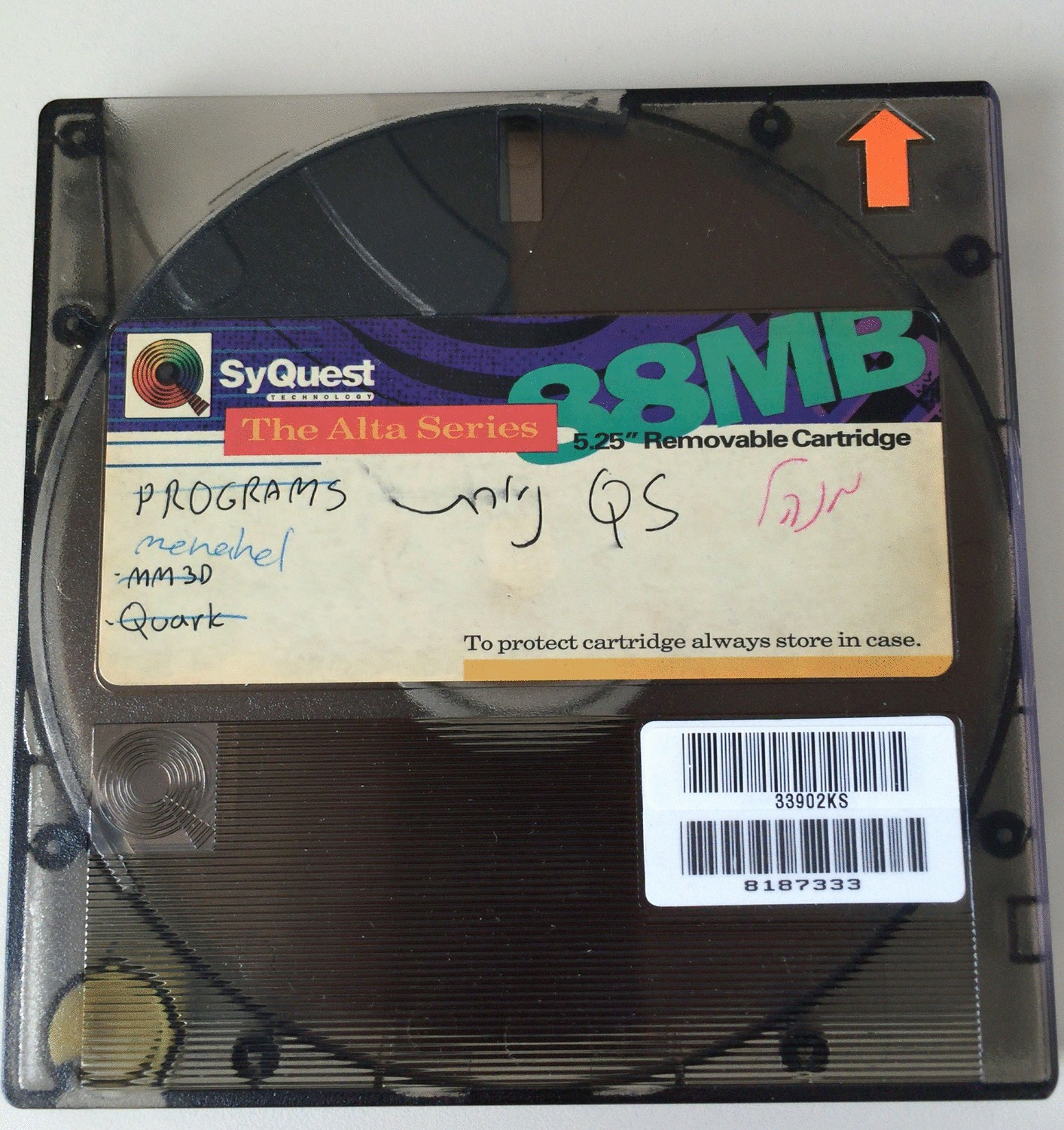 The first versions backed up on 88 MB tape, while today the size of the application is ~ 10 GB.

One of the challenges was that the Windows 3.1 did not support the Hebrew language and the developers had to manipulate the code to write from right to left. This done in all forms and menus and caused delays in the development team that consisted of one developer and two other employees that provided the accounting background, since the first version focused on accounting only.

For context, it is worth understanding the market at the time. The market position of Apple, with its graphical computing hardware based on high profit margins, declined in the early 90’s, while Microsoft improved its DOS based Windows 3.0 system, began looking for new markets while targeting business users. For QuickSoft management to bet also on the business-oriented market approach of Microsoft Windows was for sure the right direction.

The basic infrastructure of the product came from the MAC school management software and included forms and Database elements called Atoms. As you can see in the main menu snapshot of the windows version of Menahel, there are many Mac GUI elements. 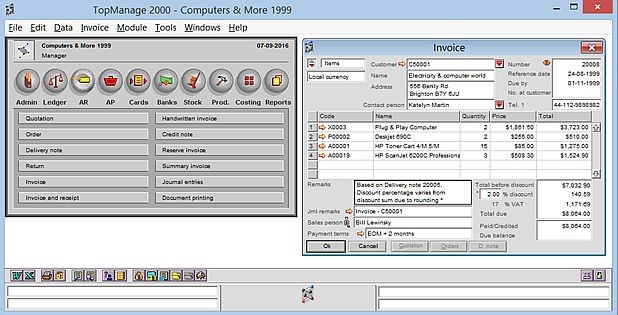 The initial product was called OCEK (Practitioner in English) and this is the reason that most of the Database files in SAP Business One start with O (OINV, OCRD, etc.).  Starting 1995 the new name of the product became MENAHEL – (Manager in English) The name in Hebrew is also the abbreviation of “Management information and accounting for businesses “, The very early release of MENAHEL was available for both Macintosh and Windows operating systems, and for a few years there was parallel development on the two systems (i.e. every new release had two versions).

Long before the current licence key, we used a security plug to protect the product.

In the next installment, I will focus on the first challenging days and the efforts to penetrate the conservative and mature DOS based accounting software market with a young innovative product based on the new Windows operating system and work environment. To make sure this activity will focused on the new market and work properly, the Agassi family established a new company called Menahel.

If you ask yourself, why the default user name to access SAP Business One is “manager” then the reason is that originally in the Hebrew version the access was using “Menahel” (Manager in English) as a user name and password.

Click here to learn more about SAP Business One